< Composition Energies RedirectedA Little Open Source Amidst the Training >
Test-Driven Training
In which I talk about the training I led, today.

Remember back on Monday when I said that I had to fill my week with typing other stuff? Well, I did. I mostly finished my leave-behind training manual (67 pages, so far) and started on the presentations for the three-day course to help the employees joining the new development stream. And, then, yesterday afternoon, a Muse inspired me to throw away the presentations and try something completely new: test-driven training!

These are developers that have, for the past five years or more, lived in the Subversion + C# + Visual Studio + NUnit world. The safe and warm arms of statically-typed systems have enveloped them for so long, they seemed like newborns looking at a new world.

Not looking good. No, sir.

But, that Muse, she inspired me. She caused me to remember a conversation that I had with bray and philipmat about six months ago. I said to them, “Wouldn’t it be cool if we could have a tutorial that showed a unit test that I could make pass? That would teach me a lot about a language or framework without having to endure badly-written prose.”

So, away with the presentations! Away with the slides and code samples that I would type and others would mimic. I would keep them engaged with writing code to make unit tests pass!

I sat down at my MBP, started a Windows 7 VM, clicked the Visual Studio icon, and built a little interface to guide the attendees through a series of unit tests that I would augment with instruction.

And, I have to say, I think I had a hit. No one nodded off. They didn’t check their smart phones. They didn’t doodle.

Instead, they typed. They learned through thinking and applying rather than listening and remembering. They can take the unit test presenter and work through them like katas.

For every code presentation that I now have to do where I need to teach people about something, I will now lead test-driven training. It’s really awesome. 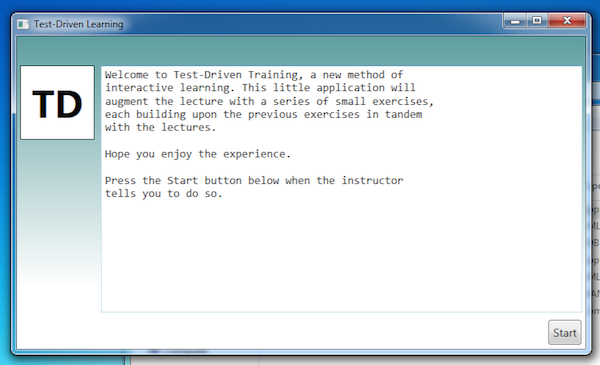 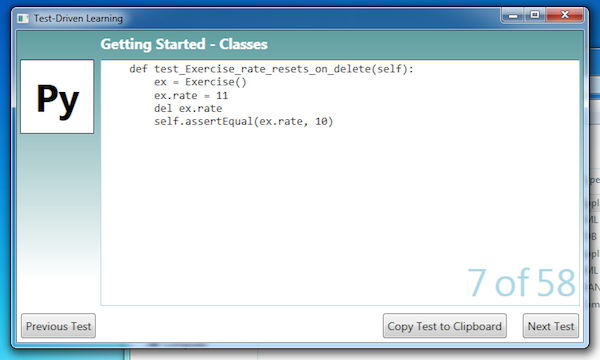 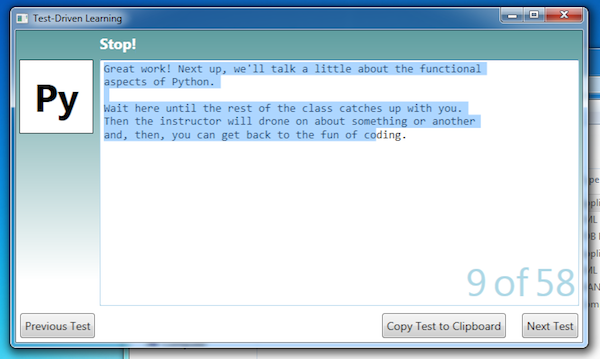