In which I learn something new about ECMAScript.

I was talking with some friends, today, that included content about a presentation I am thinking about creating on the destructuring feature in ECMAScript 2015. I showed the examples like these.

One of my friends is a C++ programmer. C++ programmers think differently than ECMAScript programmers. He asked, can you destructure an entry in an array into the entry of another array?

An update on Fang & Claw 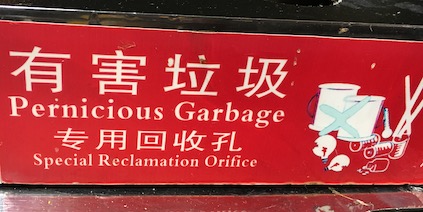 I had some time between work and walking around Shanghai to work through the summaries of the main three characters in the story. If you’re interested in following along, you can check out the links.

That’s right, you’ll know more about the story than you’ll want if you want to read the story fresh. So, there’s that.

I’m trying out the Snowflake method of writing, so this is Step 3 of the process. I completed them a couple of days ago. I’ve spent the time since thinking about this world that I’ve started creating, trying to answer the questions like

I’ve decided that it will resemble what we have, no, in the early 20th century with, hopefully, enough differences to make it a unique culturescape. This is the hardest part for me on this deadline: world building a complete world.

Enough blah blah blah. Here are the links, if you want them. Again, if you read them, the story may unfold prematurely for you. Mind you, these aren’t static. They’ll probably change as I continue to develop the story. But, I (mostly) like where they’re at, so that’s a start. This may be the farthest I’ve ever made it into planning a novel. Yay!

Points of interest to me

I’ve redesigned the front page and made the entire mobile experience better for this site.

I also added content to the fiction page where I can start putting links for new content as it gets produced.

I don’t really know why I’m doing this. I’m kind of adrift with this whole project, anyway. Really, any project. I don’t have the urge to complete it, to start something new.

Far away from home with a lot to do

Well, I’m in China and don’t have a lot of time for anything, really. But, I did find out that the national firewall blocks all Google properties, which turns out isn’t that bad (unless you use Gmail and the like).

Unfortunately, it does block the CDNs that Google powers. The default hexo theme uses one of those CDNs. Therefore, it takes forever for my site to load. I dislike that. So, I’m putting together a new theme that looks nearly identical to the last. «shrug» What’s a boy to do?

This experience has really opened my eyes to Web programming for a global audience. So, no more of that Alphabet for my work…

Oh, all the permalinks still work, which is an interesting challenge in and of itself. So, hooray?